Get the most out of your flexible solar panels this summer and every summer in the future. So, wipe the sweat from your forehead and bask in the bliss of this season

When your family is traveling outdoors, most electronic devices in your RV, such as kitchen appliances, game consoles, and beloved flat-screen TVs, tend to use and consume electricity even when not in use. Going into standby mode keeps them from using their full power, while still using enough power when you decide to turn them on. Unplug them to prevent them from draining energy completely.

Summer is the best time to be outside anyway, so why waste what your flexible solar panel has to work so hard to provide? Plug in your devices and appliances only when you know you’ll be using them and put the panels on The collected energy is stored in case you really need it.

Heat isn’t what makes your RV solar panels produce more energy in the summer. In fact, it is the longer sunshine hours that promote the generation of solar energy. High temperatures are actually detrimental to the efficiency of solar energy because it limits the reactions between photons and electrons that produce electricity. Heat agitates the molecules in solar panels, affecting their ability to convert energy from sunlight

However, due to the extended hours of sunlight that solar panels receive during the summer, the panels can still generate electricity to power your home. At the same time, it is an excellent thing to inspect the time when the factory stores electricity, so that you don’t have to worry about electricity consumption at night. 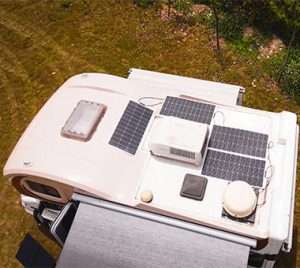 We all know that the peak solar energy usage is in summer because the best time of year for solar energy performance is when the sun is most abundant. Be aware that it is usually spring, summer, and fall. On mild days, your solar panel’s efficiency may peak, but on hot days, it may drop. Each season has pros and cons

As it turns out, you may get the best solar output in spring, not summer as you might think. This is because flexible solar panels produce less electricity when the weather is hot. This is a well-known phenomenon, and you’ll see it in the specs on your solar panel’s datasheet. It is called the power temperature coefficient and it will be listed as a percentage of power output loss per degree Celsius (%/°C). But the overall curve is the smoothest and most stable

These seasons are the best times of year to enjoy battery backup or take advantage of electricity rates. If at any point your solar panel is producing more power than you need, you may be able to sell it back to the grid for points on your next electricity bill. That way, if your solar panels produce less power than you need, you can still enjoy the energy produced by the solar system.

Enjoy solar energy in every season with pink energy

As you can see, summer is when my system produces the most electricity, with an average of 717 kWh in July. Electricity generation in December was just 122 kWh, just 17% of July’s. The 430 kWh in March was much better, but still only 60% of the July average.

In general, summer is the best for me, but you might be surprised how many days you can generate electricity even in the middle of winter. Depending on your climate, it might even do well.